The foundation is a Basque public sector foundation, coming under Bizkaia Provincial Council.

Bilbao Orkestra Sinfonikoa performed its first concert on 8 March 1922 at the Arriaga Theatre and which was conducted by Armand Marsick. The orchestra emerged from a grassroots movement in Bizkaia, with which it still has a close relationship and proof of which is the large number of local people who attend its concerts.

Down through those 90 years, the BOS has been active both in Bilbao and Bizkaia and abroad. In July 2003, the BOS, under Juanjo Mena, was invited by Valery Gergiev to perform at St. Petersburg’s Mariinski Theatre as part of the celebrations to mark the city’s 3rd centenary. The concert marked a milestone in the Orchestra’s international outreach and it is regularly invited to La folle journée (Nantes)and La Roque d’Antheron (Marseille) festivals. It has been invited to Japan twice: in 2007, where it performed a series of 10 concerts in Tokyo for nearly 40,000 people, and in 2009, when it went on tour to Osaka, Fukui, Tokyo, Fukuoka, Yokohama and Gifu.

Apart from the orchestra’s presence in international forums, special mention should be made of the tours of Spanish cities in the history of the BOS that meant it was de facto the “Orchestra of the north” for decades. The BOS has also frequently performed at the National Auditorium in Madrid, at the Donostia-San Sebastián Musical Fortnight, at the Santander International Festival, Paris Festival, or at the Ibermúsica “Orchestras of the World” cycle. In March 1988, the BOS was invited to the concert to mark Carmelo Bernaola, Cristóbal Halffter and Luis de Pablo being awarded honorary doctorates by the Complutense University of Madrid. In 1998, the orchestra represented the Basque Country at the Lisbon World Expo and took part in the opening of the Euskalduna Conference Centre and Music Hall, the home of the Orchestra, in 1999.

The list of conductors who have led the BOS include renowned names of the ilk of Enrique Fernández Arbós, Bartolomé Pérez Casas, Ataulfo Argenta, Eduardo Toldrá, Sir Malcolm Sargent and Igor Markevitch, and others such as Charles Dutoit, Ros Marbá, García Asensio, Jerzy Semkow and Josep Pons. It has also been conducted by Maurice Ravel, Jesús Guridi, Pablo Sorozábal, Jesús Arambarri, Krzysztof Penderecki, Carmelo Bernaola, Luis de Pablo, Ernesto & Cristóbal Halffter and other composers to perform their own works.

As part of its discography, the BOS conducted by Juanjo Mena recorded an interesting collection of Basque music for the Naxos classical music label (Arambarri, Guridi, Arriaga, Isasi, Usandizaga, Sarasate and Escudero) and works by Rodrigo and Takemitsu with Kiyoshi Shomura, the Japanese guitarist, for the EMI JAPAN label. In 1985, it recorded Arriaga works with Jesús López Cobos. It also released a CD under the Thorofon label of Schönberg’s Gurrelieder, recorded live during the concerts to mark the orchestra’s 90th anniversary and conducted by Günter Neuhold.

In addition to its chamber and season-holder seasons at the Euskalduna Conference Centre and Music Hall, its outreach to the towns of Bizkaia, its involvement in ABAO operas, and its tours and outings, the Orchestra plays a key educational role: concerts for schools since 1985, an initiative in which it is considered a trial-blazer, family concerts and social inclusion through music activities. It also has lines of collaboration in place with other cultural institutions, such as the Arriaga Theatre, the Guggenheim Museum Bilbao and Bilbao’s Fine Arts Museum.

The activity of the BOS is possible thanks to the support of its many supporters and to the contributions of its patrons, Bizkaia Provincial Council and Bilbao City Council.

The BOS began its activity in 1920 in Bilbao, where the creation of a symphony Orchestra was fostered.

That year, the Belgian musician Mr. Armand Marsick arrived in Bilbao to direct the Conservatory. Hence, the idea which had been brewed by Gortazar, Alaña, Arisqueta and their group was reinforced by Marsick’s technical qualification, and consequently, Bilbao Symphony Orchestra gave their first concert at the Arriaga Theatre in 1922. Thus, Bilbao joined a whole trend in the western world and private economic assets turned into public cultural assets. 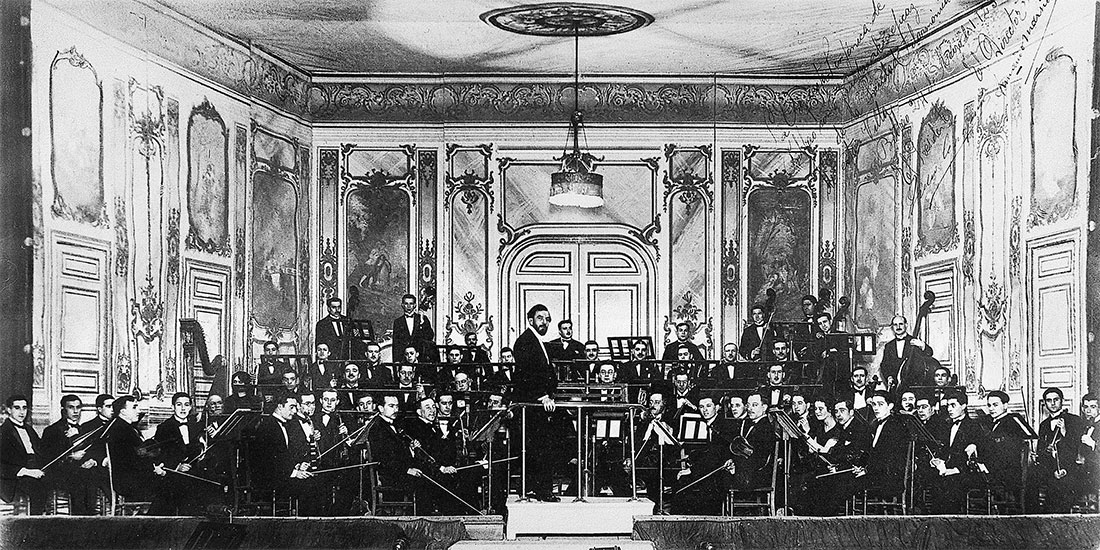 At that time, in the 20s and 30s, Bilbao Symphony Orchestra survived thanks to the tenacious and systematic will of a few. In spite of the subsidies granted by the Provincial Council, the City Council, and the Philharmonic Society, the continuous deficits became overwhelming in the 30s, just when the Orchestra, led by the young Jesus Arambarri, headed for its peak and gave concerts with Piatigorsky, Rubinstein, Eisenberg or Zabaleta. On 10th August 1938, a “connoisseur” and past member of the pre-war orchestra was appointed Mayor of Bilbao and the Symphony Orchestra turned municipal. The City Council itself took care of its funding. In February 1939 the Orchestra gave their first post-war concert in Bilbao, conducted by Arambarri and in 1953 Jesus Arambarri went to Madrid leaving Bilbao Orchestra at its best. Five years later, Rafael Frühbeck took charge of the orchestra and his baton conducted the first complete performance of “Carmina Burana” in Spain.After an institutional reconsideration of the Orchestra, the Provincial Council of Bizkaia financed it again and the Orchestra regained the “Symphony” qualification and was reorganized into the new “Juan Crisostomo de Arriaga Board”. In 1972, Bilbao Symphony Orchestra commemorated its 50th anniversary, another milestone. Pedro Pirfano conducted the Orchestra as of 1968. However, the last years of Franco’s regime witnessed the concurrence of a number of terrible declines, starting with the Conservatory of Bizkaia. Finally, the Orchestra was saved, thanks to Luis Olarra’s economic aid, who preferred personal aid for the musicians to institutional aid. Some difficult years went by until the new local councils defined their cultural policy. The professors chose to make their protest against the Bilbao season and attend the concerts in the towns of Bizkaia. But all those professors, led by their deputy director Urbano Ruiz Laorden, wanted to remain an Orchestra. Finally, Banco de Bilbao, with its “Music time” cycles, made it possible to link with the administrative normalization in the year 1982.

Since that year, the BOS found a role within the Basque Country’s cultural project created with the recovery of self-government. The Provincial Council of Bizkaia, Bilbao City Council and, during the first years, the Basque Government, through their participation in the Board which manages the Orchestra, provide the funds necessary for its operation and development. One of the main landmarks in recent years was the construction of Euskalduna Palace, which has become the headquarters of the Orchestra and which has brought about a spectacular improvement, both for the public who attend the concerts as well as for the working conditions of the musicians.